This year, we have decided at "Curtain Call" to intensify the community work by means of theater and cinema with issues programmed to dismantle mental blocks which alienate people from those who differ from them.
We, at "Curtain Call", believe that getting to know one another will reduce violent and stereotyped attitudes dramatically.
The programs will function in two stages:
Stage I – making up a group including people from two different communities. The mixed group will deal with similarities and dissimilarities. Afterwards, an original play will be created, based on the members' inner world and will relay the process they undrewent.
Stage II – Contribute to the community by performing in front of different audiences and crowds all over their neighborhood – in schools, social clubs, day centers, community centers, etc. – thus, bringing up and encouraging a new type of open discussion.

A Community theater has the ability to develop and deepen a dialogue between groups which are at conflict. Conflicts evolve sometimes 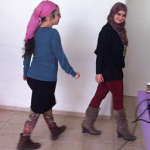 because of a certain reality and background and not necessarily as a result of the individual's wishes.
When people from both sides, Jews and Arabs, meet and create a theater group which aims at dealing with everyday issues, a new communication channel opens up as well. Through this new channel one can see and hear – maybe for the first time – issues that were, seemingly, distant, in fact – avoided. Bringing up the common and the different ideas, with which one does agree or does not on stage offers an empowering experience which in its turn allows a change of ideas and ways of thinking that later on may be tunneled into positive action, within the group and its audience.

The attitude towards religion differs from person to person, from family to family, from group to group. These 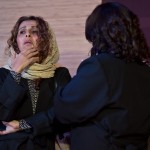 differences cause, at times, tension and conflicts which may lead to alienation, even to aggressionat .
A community theater group made up of both religious and secular people may open a fruitful dialogue among them all. Bringing up the differences and the points in which they cannot agree will reveal the different layers in the way people regard religion. Getting to know each other better, talking and discussing those issues may help understanding one another better – may help in agreeing to disagree.

Throughout the years, while working with various groups we at ”Curtain Call" were not surprised to find out that many of the 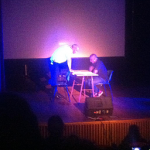 created plays and films dealt with violence, for example: youth violence and the way alcohol and drugs affect them; violence towards the different; violence within the family;  sexual violence and economical one as well.

Since this is a subject that touches all layers of society, a special violence prevention program which engages young people and adults has been developed.

This program aims at developing an inter-generation discussion which will deal with violence, its roots and the way to rout it.

In many places around the country there are large gaps and misunderstandings among the local inhabitants.  For instance in mixed towns inhabited by Jews and Arabs, in cities with deep economical inequalities, in towns where ethnical origin causes segregation, etc.

The establishment of a community theater group made up from the variety of sections would allow members to get to meet and learn about the others, thus encourage and enable a change in attitudes and create a local unity.